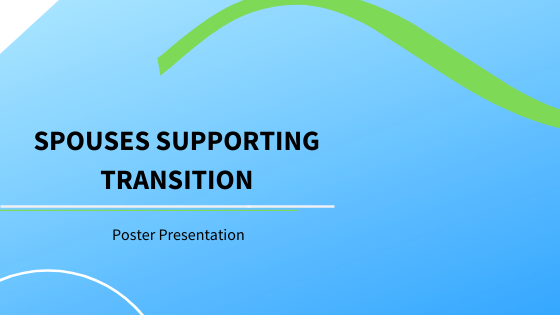 The Office of the Veterans Ombudsman’s (OVO) 2017 project, Transitioning Successfully: A Qualitative Study, identified spouses as one of the greatest sources of support for medically-released Veterans who self- identified as having successfully transitioned to civilian life. Spouses Supporting Transition seeks to better understand the lived experiences of spouses supporting Veterans through the transition process.

Begun in 2018, Spouses Supporting Transition is a qualitative study looking at the lived experiences of spouses of Canadian Veterans who medically released between 2006-2016.

Phase I: A comprehensive online survey focused on five areas:

Of the 13 survey respondents in Phase I, most were 40 years of age and over and lived in Ontario. None had served in the military themselves. Seven respondents took part in the Phase II focus group. Most of their Veteran spouses had served 20 plus years and were non-commissioned Army members.

“Initially you are in crisis mode for months. You’re still dealing with effects of stuff that happened 10, 15 years ago.”

Top three most stressful aspects of the transition process:

Service dogs and pets in general both received positive mention.

Most participants’ employment was affected by the transition in one of the following ways:

54.5% of respondents reported increased household responsibility. Some participants discussed not being able to ask their spouses for certain kinds of help either because the Veterans were overwhelmed by the impact of the transition or due to the Veterans’ physical or mental health barriers.

Few participants accessed Canadian Armed Forces (CAF) or Veterans Affairs Canada (VAC) services and, of those who did, they reported the programs were only somewhat to moderately effective. Participants preferred supports delivered by non-profit organizations or third parties. Participants were either unaware of CAF/VAC services, or found them to be confusing and contradictory which aggravated the Veteran’s mental health and recovery. In general, participants felt that the government does not understand the needs of the modern medically-released Veteran.

Many participants mentioned stigma around accessing services, appealing decisions, or seeking counselling for mental health issues. Notably, the participants all had differing definitions of “success” as it pertained to the transition process. Many characterized their transition as ongoing.

“I never knew the transition process would be as hard as it was… No one talks about it.”

Ten of the participant/Veteran couples had children. Fifteen of the 22 children were under 18 years of age. Two children was the average per couple.

“The kids know Dad’s fuse is short. They come to me for everything, I am the constant” - Focus Group Participant (FGP)

“It hurt my resume, jumping from job to job. My opportunities are now limited” - FGP

“It has taken about four years. Our transition is still ongoing, but we are on the upswing instead of the downward spiral now.” - FGP

“Finding a new doctor was an issue, especially when the doctors are not on base.” - FGP

“Some days I just have to stay home because I’m worried about his mental health.” - FGP

“If you’re posted to one of the most expensive places and now you can’t move, that’s tough. We can’t afford it.” - FGP

“During that transition I wasn’t sure we were going to stay married.” - FGP

“He cannot be relied on to care for our children.” - FGP

“The Veteran’s PTSD affects me and my children.” - FGP

“My in-laws were amazing. It would have been much more difficult without them.” - FGP

“Family. My parents and his parents.” - FGP

“My greatest source of support would be my daughter.” - FGP

“With my best friend, it has been easy for me. She doesn’t understand everything, but I just need her to listen.” - FGP

“The counselling really helped slow things down for me.” - FGP

“The mental health support has strengthened our marriage.” - FGP